Typical uses of HPW include

Pure Water Group designs and constructs many water treatment systems incorporating deionization. These systems may produce Ultra Pure Water (UPW) for the power generation or semiconductor industries, in which ionic contamination is unacceptable, even at extremely low levels. While other industries describe the water they use as UPW, water quality standards vary widely. Lower resistivity applications, such as pharmaceuticals and renal dialysis require Purified Water (PW) and Water For Injection (WFI). 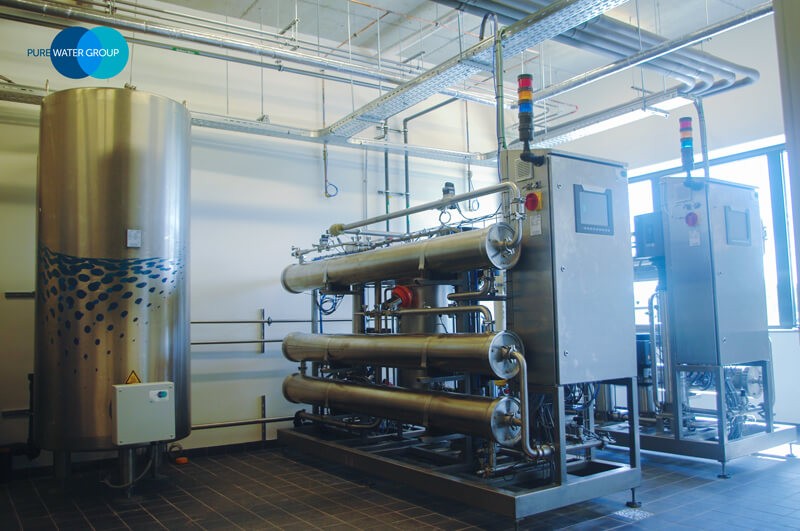 Skid – mounted systems – Over recent decades there has been a significant change in the design of Purified Water (PW) (and WFI) equipment, both in generation and storage and distribution systems. Because each design is rarely a one-off, the systems have become more reliable and the use of standard systems has greatly improved cost-effectiveness. It has also made it possible to make Factory Acceptance Testing (FAT) more extensive and effective. Most of the Installation Qualification (IQ) and Operational Qualification (OQ) protocols can be carried out by Pure Water Group prior to the equipment being shipped to site.

As we have indicated, the almost universally accepted combination of technologies is Pre-treatment, RO (sometimes a second RO stage is necessary) and EDI. Often UV light irradiation is included after the EDI unit. Subsequently, to produce WFI, an Ultrafiltration (UF) stage is added after the EDI unit. This second membrane stage is required to ensure that the endotoxin limit of 0.25 EU/ml can be guaranteed, irrespective of levels in the water supply.

One of the key developments in RO/EDI/UV/UF systems for WFI is that all technologies can now be hot-water sanitized at 85°C +/- 5°C.

The variation in water quality standards for different applications makes it difficult to generalize about Pure Water and its treatment processes. However, Pure Water typically undergoes softening, microfiltration, ultrafiltration, degasification, and deionization stages. In applications where the removal of bacteria and viruses is important, the sequence is also likely to include UV irradiation and other sanitization capability.

Above all, deionization is the definitive purification treatment. Synthetic ion exchange (IX) resins was once the mainstay deionization process, with Reverse Osmosis (RO) emerging in the 1960s to perform the bulk ion removal prior to 'polishing' by IX resin bed deionization. From the 1980s Electro Deionization (EDI) began to be used instead of resin bed equipment, which periodically requires acid and caustic regeneration. The EDI process offers savings in total cost of ownership when compared to conventional DI, while eliminating the need for downtime and hazardous regeneration chemicals.

Although deionization by RO and EDI is important in PW and WFI production, the role of Reverse Osmosis is not just to remove dissolved ions. Remaining bacteria, other organics and particulates are taken out with RO, following pretreatment. Naturally, for medical and a lot of pharmaceutical applications, bacterial content must be rigorously controlled and sanitization is common practice here. This can be achieved chemically, by ozone or hydrogen peroxide treatment for example, or by high temperature flush-through, often using hot water or even steam.

For pharmaceutical systems, in addition to removing these impurities in accordance with the appropriate legal criteria, it is important that systems are strong in terms of reproducibility, reliability, monitoring and recording.

The pharmaceutical industry and health care applications, such as Renal Dialysis, alone have standards defined by legal specifications (pharmacopoeias). All other industries set water standards to meet the commercial and practical requirements of their manufacturing operations. Apart from the introduction of Highly Purified Water (HPW) in the European Pharmacopoeia in 2002 and the abrogation in 2019, the quality requirements for pharmaceutical grades of water have not really changed in more than 150 years. Important though was the leverage of the European Pharmacopoeia (EP) and the United States Pharmacopoeia (USP) by approval of non-distillation techniques for the generation of WFI in 2017.

Water for Injection (WFI) is one of the most common utilities in pharmaceutical applications Initially, all WFI was produced by distillation. Multi-effect and Vapor Compression (or Thermo-compression) distillation equipment continues to be developed and used for producing WFI but the basic design principles have not changed. In Europe, multiple-effect stills have been widely used but they require higher pressure plant steam and typically a higher grade of feed water than vapor compression technology.

Since 2017 however non-distillation systems (purification processes equivalent to distillation (such as reverse osmosis coupled with appropriate techniques)) are allowed in Europe to equal USP requirements.

Of all the medically-related applications for Pure Water, hemodialysis and particularly HDF online are probably the most dynamic in terms of recent development.

The application is not purely concerned with removing bacteria from the water supply. As hemodialysis patients process extremely large quantities of water it is vital that trace impurities are removed from the water in the dialysate, otherwise they would accumulate hazardous levels of toxins in the bloodstream. The fact that large quantities of water are consumed also, inevitably, has consequences from the aspect of operating cost and efficiency.

Clearly, as hemodialysis becomes more widely available, the advantage of providing the necessary water quality using compact, on-site systems continues to grow. For Pure Water Group, providing solutions for hemodialysis and HDF online has become a specialist subject of expertise over the past 20 years.

Specifications – While all hemodialysis equipment and renewables, including water treatment systems, must be of high quality, these are governed by different standards around the world. In the Netherlands, the normal purification following pre-treatment is by 2-stage RO and UF, sometimes with EDI to ensure compliancy with EP WFI requirements. Typical variations for night time treatment (or even 24/7 dialysis treatment availability) include three pass RO with UF and two pass RO with EDI and UF.